A font intended for a generation that prefers viewing to reading; A Braille-like font for those not visually impaired; A font that allows text and video to be combined in an innovative way→

That we now write and read less is not new → From habitually reading longer texts, we have switched to short messages, and from these to voice messages → We generally nowadays prefer short videos to reading → A text without time-based visual stimulation (that is: video) can be likened to the silent films of the past → In this project I propose a solution for a generation that prefers viewing to reading, by means of a writing system able to interact in a natural way with visual images in motion →

Dot.Font is one of four works created for a solo exhibition called “Practical Particles” at Israel’s Vitrina Gallery (2015) → The exhibition presented typographical reactions to current cultural and mass-media events → The work consisted of a wall-screening of the letters of the alphabet, in reductive form, in a flickering loop → The letters are not recognized as such at first glance → At most, the minimalist design reminds us of Morse code or Braille → Three animated-GIF sequences were also screened, each showing single letters: Sean Connery, in his iconic role as James Bond, “shows” the letters J and B; the Village People are accompanied by the letters Y, M, C and A; and an agitated American teenage girl pronounces the letters O, M and G again and again → I have chosen these familiar performances to help the audience learn the new font → In each of them the figures enunciate single letters, and the animated-GIF loops allow for “didactic” repetition, until fully assimilated by the viewer →

Dot.Font allows text and video to be integrated in a visual way, as equals → The letters appear one after the other (and not one next to the other), which allows for perfect synchronization between video and text, as opposed to the conventional situation in which the eye has to follow each separately and combine them using one’s imagination →

The Dot.Font letters are an extreme reductive interpretation of the Latin alphabet, while using the most minimalist means possible → Thus, for example, the letter “A”, with its typical triangular structure, was reduced to two dots on its base and a further dot at the top, in a manner which evokes a triangle in our imagination. This follows the gestalt principle, according to which we tend to regard similar items as a group and give it meaning → The letter “B” was reduced to four dots: two representing the vertical line on the left, and two representing the right-hand side arcs, and so forth → 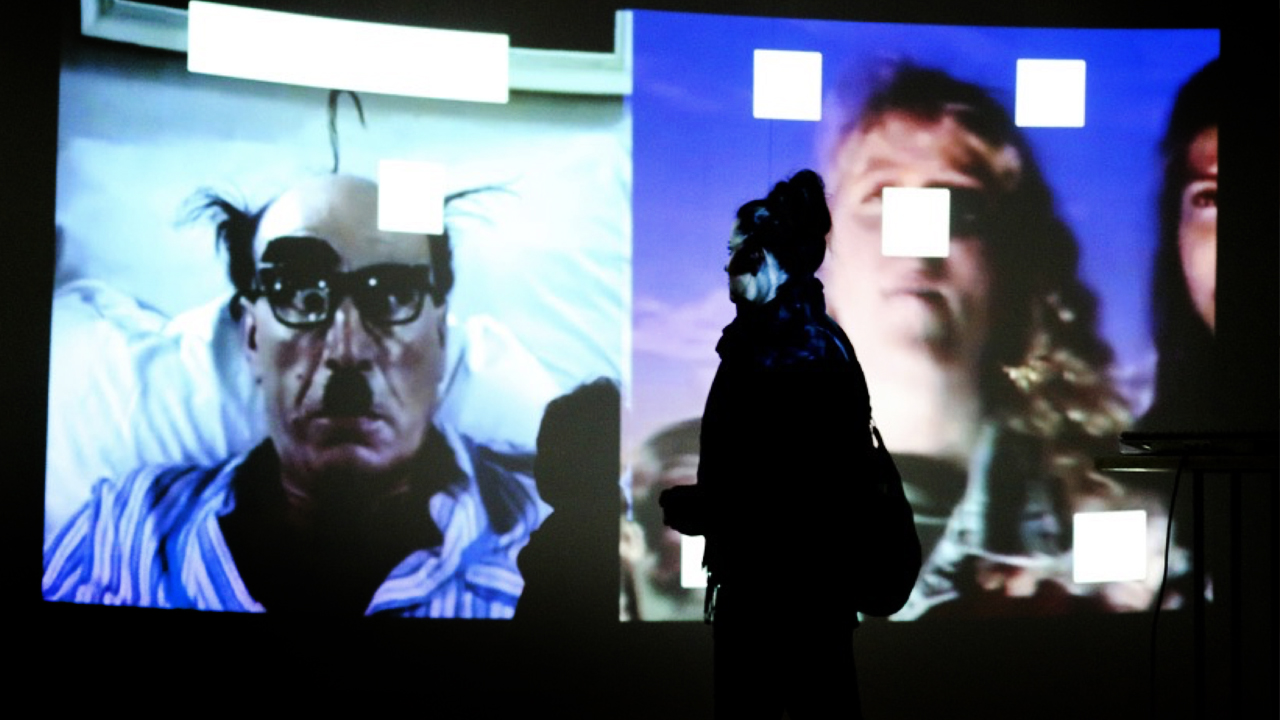 Exhibition view of the Dot.Font project. Dot.Font allows text and video to be integrated in a visual way, as equals.

Something about the character of these letters is reminiscent of the severe formalism and the almost compulsive strictness of the minimalist American artist Donald Judd → In relation to his works, which look like installations of geometric shapes in space, the art critic Clement Greenberg claimed in 1967 that they are “closer to furniture… they are no more than a good design” → But the basic characteristics of the minimalist stream, such as mathematical analytics, repetition, replication and multiplicity, the generic-like anonymity of the product and its creator, their timelessness and the sense of lack of feeling, character and history, are stronger than any criticism, and are also characteristic of the approach that gave birth to the Dot.Font letters → Thus, these letters (in line with Judd’s definition) can be also called “specific objects”, meaning they are not actual letters, nor are they random shapes →

Loyal to its minimalist spirit, the new font consists only of upper case alphabetic letters, with no lower case letters → All letters were drafted on a fixed square grid called a “cell” (similar to a “Braille cell”). The width of the cell of each letter is always nine squares, which makes the Dot.Font a monospaced font → To paraphrase minimalist art, one may claim that Dot.Font “organizes” its environment and defines it as a “terrain”, using as few elements as possible →

The Dot.Font letters strive for the most universal expression → One that does not carry with it a “cultural” or historical burden, and does not create specific emotions or feelings → In this respect, this is perhaps the closest expression to the famous Crystal Goblet approach of the famous early 20th century typography researcher, Beatrice Warde, who argued for creating the quietest and most unobtrusive typographic creation, so as to prevent the letters from interfering visually with the text and its meanings → 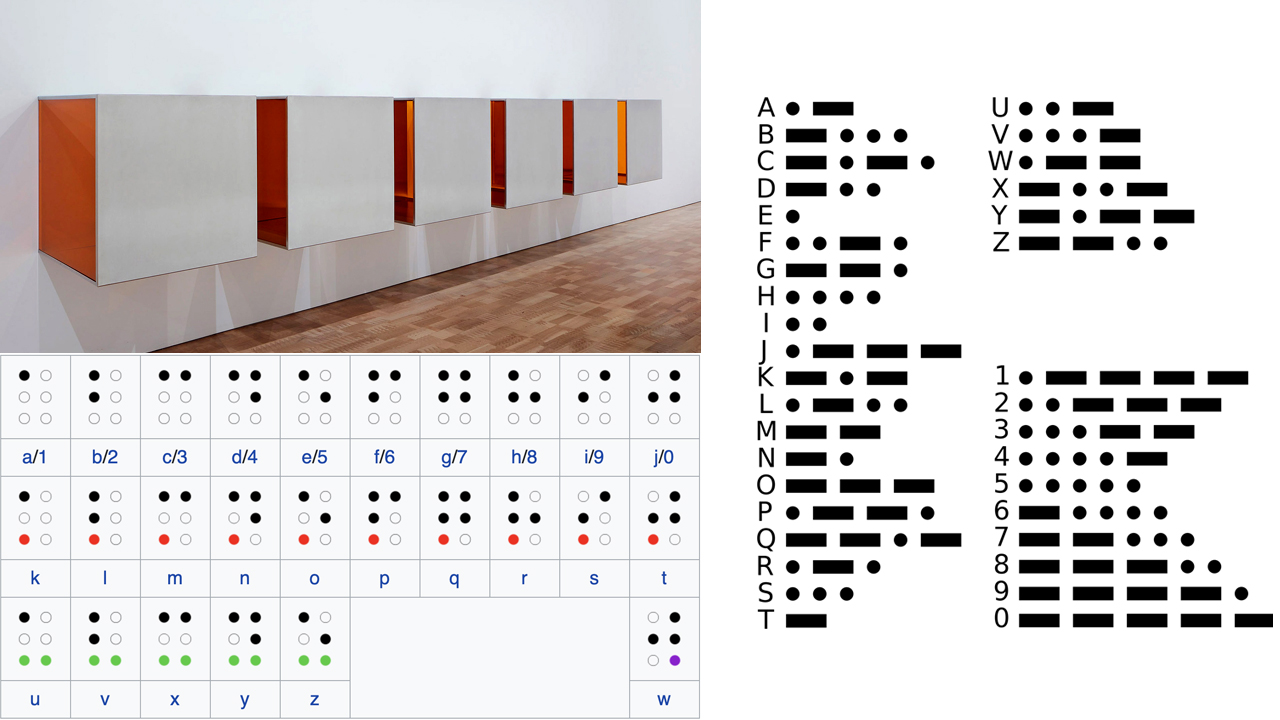 Upper left: Untitled, 1966/68, by Donald Judd at the MoMA. Lower left: Derivation (colored dots) of the 26 braille letters of the Basic Latin alphabet from the 10 numeric digits (black dots). Right: Chart of the Morse code.

The Dot.Font letters are also detached from the traditional connection between typography and the hand of the calligrapher → While most current fonts, even the most modernistic and “technological” ones, are based on general principles which originate in the personal hand movements of the calligrapher, the Dot.Font letters are produced technically, marking the lines and significant meeting points of the letters so loosely, in a crude and calculated manner, that some of the letters are only barely recognizable → This gives the reader the feeling that the font was designed by mathematical calculations, and not through human creation →

Despite a certain similarity between Braille and Dot.Font, there is no real connection between the two systems of writing → In both cases each symbol occupies a rectangular space, called a “cell”, but while Dot.Font is committed, even if only in a vague technical manner, to the form of Latin letters, Braille is an independent system of six fixed dot combinations → We can say that while Braille, intended for the visually impaired and read using the sense of touch, is not connected to any other writing system, Dot.Font, intended for viewing (and not reading in its traditional meaning), is an extreme analytical reduction of Latin fonts →

There is a certain similarity between Morse code and Dot.Font letters: both are “writing” systems based on points and lines, and both are time-based reading systems → But any similarity is only external → Morse code is a binary system (which has only two states: on and off), and which receives its visual expression – dots, lines and spaces – by virtue of this fact → Dot.Font relates to the lines and main meeting points of the Latin letters as necessary elements, and uses the space around and behind the letters to mark the letter in the most minimal fashion, thus creating spaces between those elements and allowing a direct dialog with the image behind them →

The loose connection of the new signs to “proper” lettering allows one to react to them as typographical signs, but no less importantly, the direct interaction between the “airy” letters with their background or the image around and behind them, dispenses with the traditional separation between typography and image, making the connection between them both natural and complete.