A literary-typographical project, focusing on two of the most important female Hebrew poets, demonstrating original thinking in making a personal text accessible to the public →

This work was commissioned by the Itim Ensemble and the Gnazim Archive of Hebrew Writers in Tel Aviv, for a website dedicated to an artistic project based upon letters from the archive → In the archive are hundreds of thousands of personal documents of Hebrew authors, poets, playwrights, thinkers, editors and writers – personal letters, professional letters, love letters, hate letters, political letters and historical letters from the mid-19 th century to current times → From among the many letters in the Gnazim Archive, the artistic managers of the project chose 40, to be the central axis of an artistic response by a selection of contemporary artists from various artistic fields → From these, I chose the letter of Israeli poet Yona Wallach to another local poet, Zelda – neither of whom are necessarily familiar to international audiences → 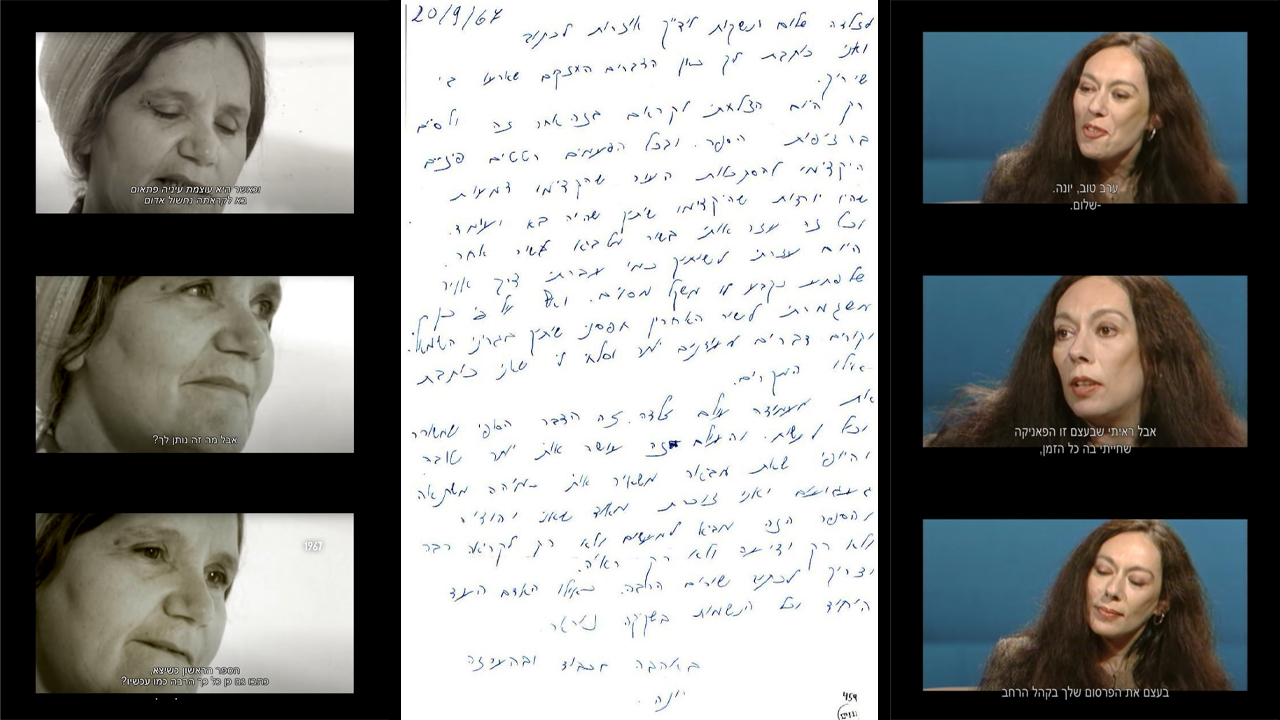 The letter of admiration from Israeli poet Yona Wallach to Zelda. A fictitious poetry book was created from pieces of the original letter.

Yona Wallach (1944-1985) was an Israeli poet, notable in her unique style and influence → During the 1960s, a time in which Israeli society saw a rise in liberalism and permissiveness regarding sex and drug-use, Wallach was a daring and exceptional example – her daring also found expression in her poetry → She dealt with new subject-matter, unrelated to time, place, culture and environment, such as sexual identity and gender-change, and with subjects disconnected from a cultural context – as opposed to her contemporary poets and the then accepted poetry → She combined these with “street language” and often vulgar, “anti-poetic” language → Wallach published her first book in 1966 → This was an avant-garde book in its surrealistic and Jungian subject-matter, that marked the beginning of a new era in Hebrew poetry → Wallach’s difference, the defiance inherent in her personality and poetry, and her enormous sensual charisma that I could sense in her poems, touched the very core of

the teenager that I was in the 1980s, and gave me considerable consolation → In the days to come, when I had become a graphic designer, I would thank and pay tribute to her and those other artists who influenced me deeply, in a variety of ways →

As opposed to Wallach’s secular, tempestuous and sensuous poetry, the poetry of ultra-orthodox Zelda Schneurson Mishkovsky (1914-1984), known simply as Zelda, yearned to be at one with the divine by way of mundane detail, and her poetry lacks bodily eroticism and sexuality → Zelda did not perceive writing as an artistic act but rather as a religious act, and used to write her poetry on scraps of paper and hand them out to anyone she fancied → In her poetry, Zelda combines simple, spoken language with feelings of spiritual uplifting and holiness → She finds delicate beauty and a sense of wonder and excitement in the drabness of everyday life, in poverty and ugliness and sometimes even in evil → Despite the praise she received during her lifetime, Zelda was shy and lacking confidence regarding her writing and saw her poems as bereft of the vitality of great poetry → her book, “Zelda’s Poems”, published a year after her death, is an anthology of all her poems and is one of the most popular and most-loved Hebrew poetry books → 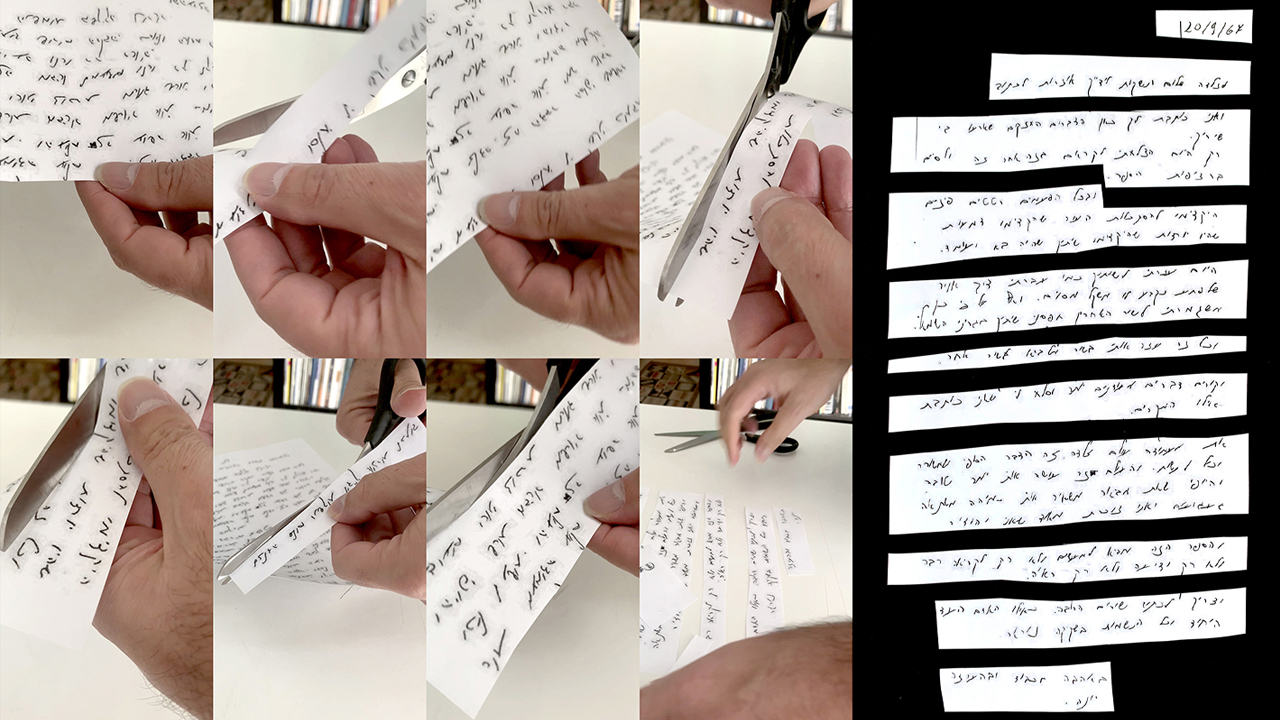 The work began by analyzing the letter, dividing it into ten paragraphs.

Poetry, as an art form, fascinates me because of its aesthetic features which enrich the literal meaning of the text → The tone, the rhythm, the thought-stimulating vagueness or a cryptic sentence which suddenly appears → The mixing of one word within another word, one word rubbing up against another, one word clashing with another, a sentence which begins and is suddenly and surprisingly cut off → I experience poetry in an almost plastic way, as though viewing a painting hanging on a wall →

This is, in fact, my second work relating to Yona Wallach ← in 2003 I created “Stami and Klumi”, a typographic homage to the poet ← This work, in the format of a 98x68 cm poster, presents the words “Stami and Klumi” (“Stam” being Hebrew for “just so”, and “Klum” meaning “nothing”), the name of one of Wallach’s poems ← The words are created from chewed gum ← The use of such a prosaic, banal, material, to create the typography, echoes the emptiness, insipidness and existential loneliness expressed in the poem → 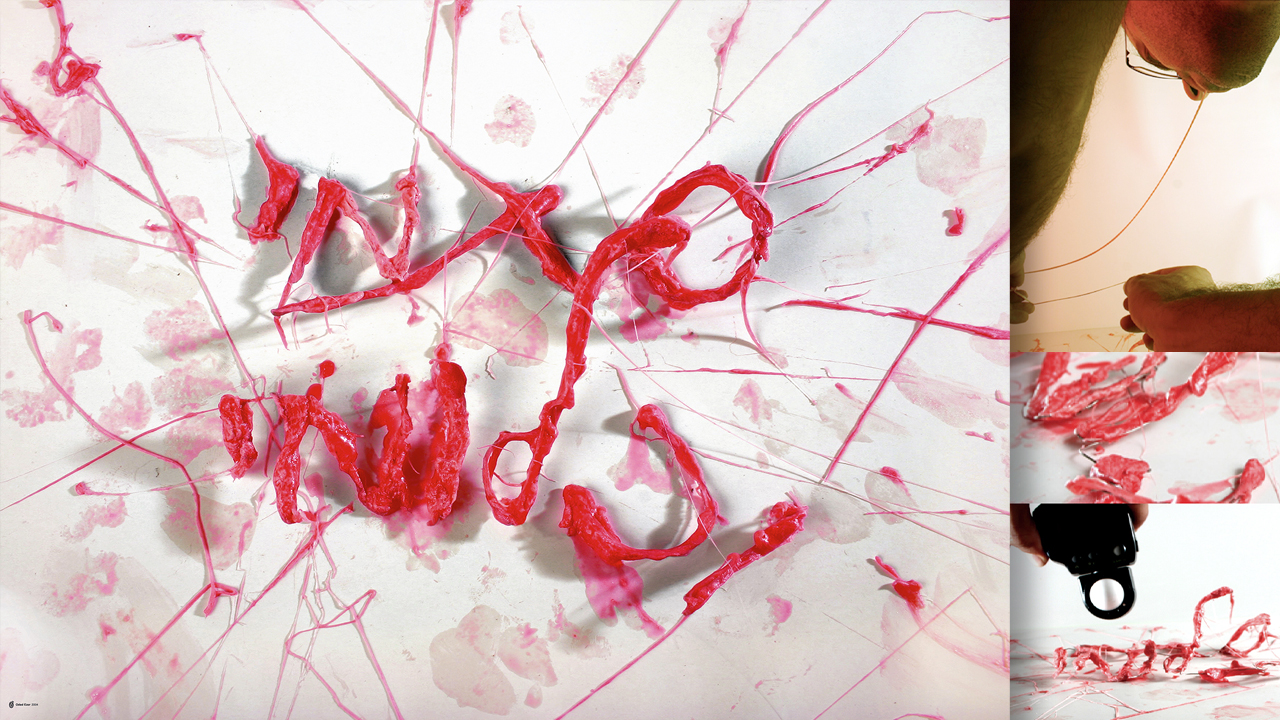 “Stami and Klumi”, a typographic homage to the poet. The words are created from chewed gum.

Wallach’s touching letter to Zelda was, of course, not meant to be defined as a “literary work”, and was not written as such, but the writer’s skill turned it into a document full of lyrical poetry and drama, maintaining the tension and the immense vitality held within → In my response to the letter, I chose to transfer the format of the text from that of a familiar personal handwritten letter → with the date, salutation and greeting at the beginning of the letter; the body of the letter, containing an opening, content and description, and a conclusion; and finally an emotional closure and signature → into the format of a printed poetry book, automatically endowing the text with a more complex emotional space, allowing for slower and deeper reading, normally the province of printed and bound poetry → The work began by analyzing the letter, dividing it into ten paragraphs, each consisting of one idea or event at a time → I then continued to divide the paragraphs into short clipped poetry lines, to emphasize and allow for dwelling on the various parts of the paragraph, with the aim of further intensifying the emotions expressed in the original text → the ten new “poems” thus created were then printed and bound → Finally I documented, in a short video, the process of leafing through the new “poetry book” →

The final result is a video lasting for one minute and twenty-two seconds, which documents browsing through the fictitious poetry book created from pieces of the original letter that Wallach wrote to Zelda → The sound in the video is that of the pages rustling as they are turned → The video opens with a book cover, on which is simply written the date 20.9.67, as written at the top of the letter → In what follows, the “poems” are viewed one after another, arranged in the same order they appear in the original text, and lacking titles → At the end the last “poem” appears → “with love, respect and admiration, Yona” → and the video concludes with the closing of the book.